The Ball Arrives In Kaedon Louscher’s Glove Just A Little Too Late To Prevent Gehlen’s Baserunner From Taking Third.

Dain Moermond Dropped In A Hit During The Seventh Inning Of The Wolverines’ Tourney Loss To Gehlen Catholic.

While defense kept South O’Brien in the game during the opening round of the Class 1A District 1 baseball tournament, the bats were unable to take advantage. Gehlen Catholic blanked the Wolverines on two hits and claimed a 6-0 victory July 12 at the River View Complex in Le Mars. South O’Brien finishes the season with a record of 4-18. The Jays improved to 17-12.
“They have a lot of talent, especially when it comes to talent on the mound,” noted Wolverine head coach Tanner Petersen in reference to the Jays. “We knew it was going to be tough but my guys took a positive attitude in there and they tried. They competed as best they could and it turned out that the pitcher was really having a day.”
Gehlen starter Connor Kraft allowed just one hit and struck out 10 in his six innings of work. Reliever David Begnoche pitched the seventh and gave up the other hit while fanning two.
Although the Jays got six home, South O’Brien made enough plays in the field to leave 10 Gehlen runners stranded on the bases. “We knew Gehlen was going to be a good hitting team so we preached the defensive fundamentals,” related Petersen. “Balls are going to get hit so when they get hit to you knowing what to do with the ball. Our guys were ready to make plays. They knew that runs were going to be at a premium. They were really playing some great defense.”
Jett Keith got the pitching nod for the Wolverines and took the loss. He allowed four runs in the third and a total of nine hits over his three innings. Keith walked a batter and hit a batter. Pete Bottjen took the mound to start the fourth inning. He gave up his two runs in that frame. In three innings Bottjen yielded four hits, struck out two batters and hit two. All six of the runs were earned.
South O’Brien was held hitless until Tyson Wulf singled to lead off the sixth inning. The other hit was a single by Dain Moermond to begin the seventh. Kaedon Louscher drew a walk in the third inning and Ben Woodall received a free pass in the sixth.
Petersen shared some thoughts on the now concluded season. “I was honestly very impressed with a lot of our younger players,” said the coach. “We didn’t have a huge amount of upperclassmen so we had some younger guys step up a lot throughout the year. Just to see the potential in a lot of my younger guys throughout the year made me proud and happy that they embraced the moment and it made me very excited for the future with my younger guys.”
The coach went on to say, “I really enjoyed this year. There was a lot of camaraderie. Things didn’t go our way a lot and it could have been real easy to throw in the towel but every single night the guys showed up and they were ready to compete. Any given night you could have thought, man this team’s going to win the ball game. It just so happened that a lot of times it just didn’t turn out in our favor.”
The Wolverine program is saying goodbye to seniors Keith, Wulf, Micah Davis and Kadyn Steffens. “Jett was kind of my all-around best ball player that we had,” said Petersen. “It’s been a pleasure coaching him over the last few years because anywhere you put him, he can make a difference. He played shortstop for us but a few times throughout the year I had him playing second base depending on what the situation was. Anywhere I put him he really just wanted to go out there and compete and play the game of baseball which I know is really special to him.
“This was actually Tyson’s first year starting for varsity finally his senior year, but man he kind of took the opportunity and ran with it. He played both left and right field for us and he also did a lot of pitching for us. And attitude…day in, day out, he had a smile on his face, ready to push his teammates just to help them get a little bit better here and there. What a fun guy to have on the team!
“Micah was just a lockdown center fielder for us all year. He’s a tremendous athlete and I knew he’s got the speed and the ball tracking ability to really patrol the center of the field and he did just that. There weren’t too many times when he made a mistake. He was our mainstay in center and did a tremendous job.
“Kadyn has basically been a three-year starter for us, much like Jett. He’s just another great athlete. He might not have had the greatest numbers fielding-wise but he had to deal with some tough balls, some hard hit balls throughout the season. He played a lot of third base for us and then he transitioned over to second base for us which I think was a great move for him. Unfortunately he didn’t have a solid year at the plate but was just one of those guys who’s always trying to find extra time to come in and work on his craft. ‘Hey coach, can I come and get some extra BP. Hey coach can I stay for some extra grounders.’ You’ve just got to appreciate the amount of work that the kid put in.”
Stated Petersen, “I was very pleased with the development of our younger guys because they are going to have some big shoes to fill.”
S. O’Brien
0 0 0 0 0 0 0 – 0
Gehlen
0 0 4 2 0 0 x – 6 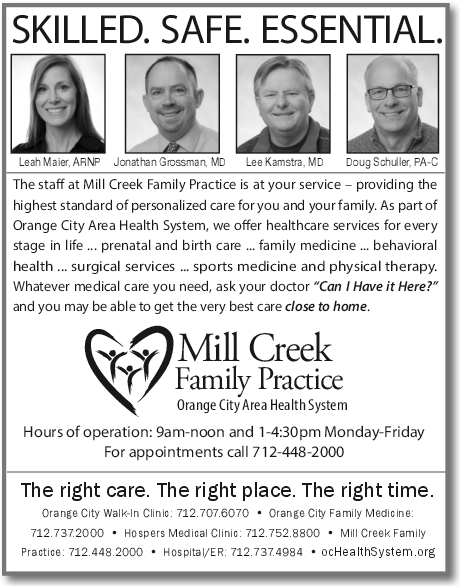 The Primghar Comm. Building will be sponsoring a Omelet Brunch, catered by Red’s Café, on Sunday, October 3 from 10:00 a.m. to 1:00 p.m. at the Primghar Comm. Building. The menu includes Omelets made just the way you like them, a variety of muffins, coffee and juice. Free will donation! Proceeds will be used towards the purchase of a photo carousel.